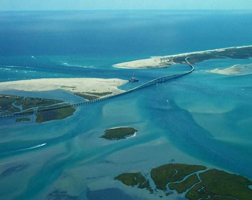 Led by East Carolina University Professor Stan Riggs, a multi-disciplinary research team is developing a scientific baseline for NC’s coastal system essential for solving economic and environmental problems. These conflicts result from increasing coastal populations in the path of storms and rising sea level and are exacerbated by human modifications of the coastal system. The impact of this research and the resulting public education and outreach will lead to development of public policy and initiatives essential for a new approach to future economic development, as well as adaptation of pre-existing development. The first goal is to explain the natural dynamics of our coastal system and summarize the evolutionary history in understandable formats for the education of NC’s citizens, managers, and policy makers. Armed with the coastal system science, the second goal is to examine the human modifications and elucidate the conflicts between natural and anthropogenic processes. Taking into account the huge economic importance and dynamics of the coastal zone, the third goal is to develop glimpses into the future and suggest opportunities for adapting to the inevitability of continuing sea-level rise and the likelihood of more high-intensity storms. The over-arching goal is to help ensure that NC continues to grow a viable coastal economy that can be sustained well into the future and to establish adequate measures to preserve the natural resource base upon which that economy is dependent. Anticipated products of this effort include a series of geologic maps and cross sections of the location and controls over the processes of shoreline recession and accretion along North Carolina’s ocean shoreline. In addition, a set of barrier island vulnerability maps for North Carolina’s ocean shoreline will be developed. Support for this effort will be leveraged with support from East Carolina University. The PIs are investigating potential addition leverage through the NC Division of Coastal Management, NOAA’s Coastal Services Center in Charleston, Woods Hole Marine Program, NC Sea Grant, and the NSF.