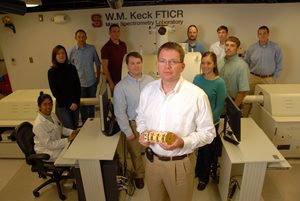 This research initiative focuses on the development and application of high performance mass spectrometry to unravel molecular components in complex biological samples to accomplish such goals as the delineation of biomarkers for disease and understanding disease processes. Dr. David C. Muddiman in the Department of Chemistry, who is leading this effort, is studying ovarian cancer in humans in an effort to elucidate biomarkers for its early detection. In 2013, Dr. Muddiman reported completing the largest study conducted to date in this arena using the reagents that he and his colleagues have developed. Dr. Muddiman also noted major breakthroughs in an ionization method developed at NC State and having identified a protein biomarker in both plasma and ovarian cancer tissue that had not previously been discovered.

Dr. Muddiman reported 13 manuscripts published, 23 presentations given by undergraduates and graduate students, and 12 lectures presented by Dr. Muddiman. Also, in order to extend the value of his work to the K-12 community, Dr. Muddiman engaged a student from Apex High School and has committed support for a Kenan Fellow teacher to work with him in fiscal year 2014-15. Professor Muddiman gave the opening plenary lecture of the Swedish Proteomics Society on November 17, 2013 which discussed his efforts on proteomics of ovarian cancer in the chicken and human model, new glycomics quantitative strategies and their application to cancer, and a novel mass spectrometry imaging ionization source for biological tissues. These are collaborative efforts with Professors James Petitte and Kenneth Anderson in Poultry Science at NC State, Adam Hawkridge at Virginia Commonwealth University, Daniel Comins in Chemistry at NC State, Troy Ghashghaei in the College of Veterinary Medicine, Angela Kashuba in the Eshelman School of Pharmacy at UNC Chapel Hill and Dr. Steven Castellino at GlaxoSmithKline.