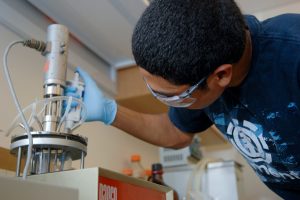 NC State Chemical and Biomolecular Engineering Professor Chase Beisel is investigating the advancement of treating genetic and infectious diseases through the directed modification of the human genome. This research effort seeks to extend the versatility of Clustered Regularly Interspaced Short Palindromic Repeat (CRISPR) technology. Notoriety of the CRISPR system has been both rapid and widespread, with the system being a runner-up in Science Magazine’s top scientific breakthroughs of 2013 and the feature of numerous articles in international magazines and newspapers such as the New York Times, Forbes, and the Economist. Professors Rodolphe Barrangou of the Department of Food Science and Professor Bala Rao of the Department of Chemical and Biomolecular Engineering are collaborating on this project.