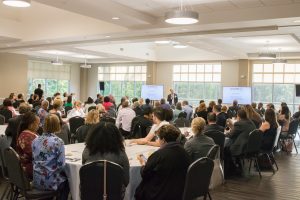 Led by the NC Office of Science, Technology & Innovation in partnership with Forward Cities, a national non-profit headquartered in Durham and Innovate NC 2.0 is currently underway. InnovateNC has advocated for the creation of a Community Innovation Fund (CIF), which was included in the Governor’s proposed 2019-20 budget at a level of $1 million over two years.  These funds would support community efforts to expand their capacity building work with the help of InnovateNC protocols and tools.

On October 2, 2019, Innovate NC held a statewide convening that engaged people from cities interested in this work, shared some of the successes of past city participants, and exposed participants to methodologies that can be applied through existing efforts around inclusive entrepreneurship.  With a sold-out audience, this event was also supported by the Community Foundation of Greater Greensboro, NC Works Commission, NC Impact, and Thread Capital. Brian Hamilton, founder of Sageworks was the keynote speaker.

Innovate NC 2.0 leverages $150,000 support from the Kenan Charitable Trust over two years in addition to in-kind and financial support from Forward Cities and the NC Office of Science and Technology. InnovateNC has held funding conversations with the ZSR Foundation and the Golden LEAF Foundation about supporting capacity-building efforts in interested cities and has discussed with the US Economic Development Association the use of capacity-building support to help lift up communities affected by recent hurricanes as a way to spur long-lasting recovery efforts.