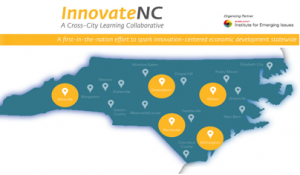 The Institute for Emerging Issues at NC State University is partnering with a powerful group of public, private, and nonprofit entities to launch Innovate NC: A Cross-City Learning Collaborative. The intensive two-year collaborative will allow up to five North Carolina communities outside of the Triangle and Charlotte to build and sustain their local innovation ecosystems on this model. By actively sharing best practices and widely disseminating results, Innovate NC intends to help scale innovation gains to other North Carolina communities.

On September 4, 2015, after reviewing 18 strong applications from communities across the state, Innovate NC announced that it had selected Asheville, Wilmington, Greensboro, Wilson, and Pembroke as its inaugural communities. A local Innovation Council (IC) will represent each of these communities. The Innovate NC Initiative continues to make great progress and the local ICs completed their Innovation Asset Map and a Community Innovation survey concluded in April 2016 with 348 total responses. Communities have received their quantitative data and are synthesizing the extensive comments into themes. Students from Chapel Hill and Duke have been working with communities to assess their policy landscapes and assist with their strategic plans. Site visits are currently underway with a very successful one held in Wilmington on April 11-12, 2016 and one held June 6-7, 2016 in Raleigh.

In addition, a site visit in Asheville was held October 20-21, 2016 and in Greensboro on December 12-13, 2016 during which the communities presented on the progress of their strategic plans. A final Innovate NC convening took place on June 8-9, 2017 in Wilson, NC. The Innovate NC initiative has also led to the development of a proposal for a North Carolina Community Innovation Fund led by the NC Board of Science and Technology that would be a competitive grant program to help accelerate entrepreneurial activity in select communities. This proposal and budget was included in the Governor’s budget proposal for fiscal year 2017-18. UNC-TV is producing a story that will feature the Innovate NC initiative. Kenan Institute Associate Director Raj Narayan is participating on the Innovate NC Partnership Pathways committee.