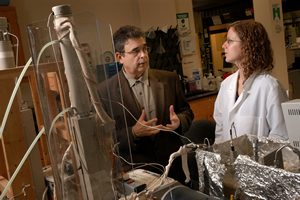 The Kenan Institute has developed a visiting faculty scholars program that enables faculty from other universities in the United States and from other countries to spend time at NC State University over a few months during the summer or academic year. The intent is to facilitate linkages and collaboration with faculty from other institutions that might eventually lead to substantive collaborative research and education programs. Funds from this program were used to support the visit of Dr. Francesc Padres Angelats from the Institut Quimic de Sierra (IQS) in Barcelona from August to October of 2012. Prof. Carbonell visited IQS in April of 2013, and a MOU has been signed for collaborative work between these two institutions. At the request of the Chancellor, beginning in 2014, support for the Visiting Faculty Scholars Program will be used to foster the engagement of NC State faculty members with the Institute for Emerging Issues (IEI). With the help of IEI we will be developing a program that will involve multidisciplinary teams of NC State from various colleges in the work being done by IEI in 2014 and 2015.