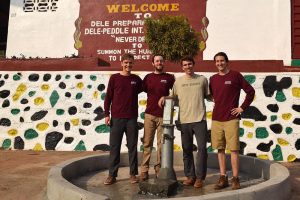 The NC State Chapter of Engineers Without Borders (EWB-NCSU) seeks to empower communities and equip leaders internationally and locally to meet their needs through sustainable engineering projects, all while developing students into cross-cultural servant-leaders. EWB-NCSU is a student-run initiative of the national non-profit Engineers Without Borders. EWB-NCSU consists of three international project teams, a local projects team, and a fundraising team.

EWB-NCSU is utilizing KIETS support towards the third implementation phase of GWS. This phase will implement 19 rainwater-harvesting systems for 18 families and one school in Caserio Panhux, Guatemala. KIETS had been supporting EWB-NCSU on their work in Sierra Leone until an outbreak of Ebola limited their work in the country. KIETS support enables EWB-NCSU to follow up on their monitoring work for the SLW and SLRE initiatives.