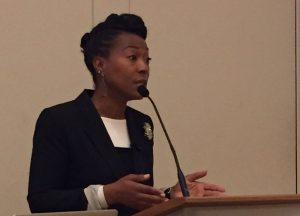 In particular, it has enabled the Institute for Nonprofits to add incredible depth to social entrepreneurship offerings during Global Entrepreneurship Week (GEW) and bring to campus speakers of international acclaim as part of our highly regarded Dinners with Purpose (DWP) series. The GEW events in November 2015 featured Ms. Kathryn Hall-Trujillo, founder of the Birthing Project, a worldwide organization that has saved the lives of thousands of women and babies of color.

In Spring 2016, DWP featured Robin Emmons, Founder and Executive Director of Sow Much Good. Ms. Emmons was recognized in 2013 as a CNN hero for her work in addressing food deserts and lack of access to healthy food for vulnerable populations in Charlotte. Kenan Institute support leverages financial and in-kind support from the Institute for Nonprofits, the Poole College of Management, the NC State Entrepreneurship Initiative, the NC State Office of Sustainability, and the Institute for Emerging Issues.