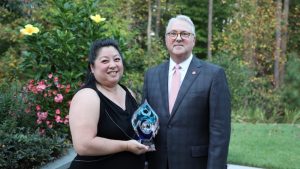 The Norwegian University of Science and Technology faculty and students previously visited NC State to ‘benchmark’ TEC as a leader in entrepreneurship education. The 2019 conference was the first time that the VCP group has met outside of Europe. That decision is the result of past presentations at annual VCP conferences outlining the TEC program and NC State’s efforts in entrepreneurship education.

This conference is part of a broader effort to create a governance structure for the emerging Value Creation Programs group. As a result of efforts to date, NC State has been asked to join Chalmers University in Sweden and the Norwegian University of Science and Technology in a leadership position in developing the strategic plan for the Value Creation Programs group to include sharing information and best practices for value creation programs as well as setting priorities for research in entrepreneurship education between the participant universities.

This would include faculty and student exchanges on a regular basis, allowing NC State to collaborate with other entrepreneurship scholars/educators in developing entrepreneurship education and research. KIETS support leveraged additional resources being provided by the Poole College of Management. In November 2019, Lisa Chang was recognized as the 2019 NC State Risley Entrepreneur of the Year.