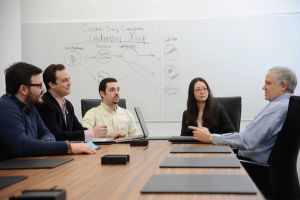 Through the Accelerating the Commercialization of Technology (ACT) program, graduate student interns supervised by an experienced manager develop reports and recommendations for NC State owned intellectual property in collaboration with the Office of Technology Transfer (OTT). All work done by student interns is based on the TEC Algorithm – a process developed during an NSF/Kenan Institute sponsored research project on technology commercialization. During 2013-14, Lisa Chang, the ACT Program Manager, managed 25 interns who triaged IP disclosures for OTT. In addition, Ms. Chang administered the 2014 Chancellor’s Innovation Fund (CIF) process, narrowing the pool of 38 applications to a group of 8 finalists for consideration by the selection committee. Since its inception and largely as a result of ACT’s support, CIF has processed over 185 CIF applications, triaged 62 invention disclosures, and awarded 17 projects an average of $75K for a total of $1,246,467. From this pool of awardees, five commercial licenses and options have been executed, $3.5 million additional development funds have been awarded from federal and private sources, $250K in revenue from licensing has already been generated for NC State, and two startup companies have been launched. Kenan Institute Associate Director Raj Narayan serves as an advisor to the TEC Program commercialization teams and on the Chancellor’s Innovation Fund selection committee. The ACT program has been benchmarked by other universities in the UNC system and has been approached by UNC GA for consultation on possible expansion in the future.